Last week Michael McDaniel spoke about a proposal to change mass transportation in Austin at an event hosted by Creative Mornings Austin. The Wire – an urban cable car system suspended by wires – offers a unique means of addressing the transportation infrastructure challenge for a growing city.

Community and Commuter Benefits
Community and commuter benefit from public transportation. Moving people with fewer vehicles reduces impact on existing roads requiring less maintenance; less toxic emissions helps create healthier air; and reduced roadway congestion allows commuters to arrive at their destination quickly. For the commuter the difference between driving in traffic and a ride on public transportation means the opportunity to identify action plans for the day; read more; catch up on phone calls or emails; or have time to decompress before arriving home.

The Wire
Current public transportation systems help address an infrastructure over-stretching to support our growing community. Expansion is necessary and the Wire offers additional benefits critical to include in those discussions. The Wire can ameliorate some limitations existing systems have: 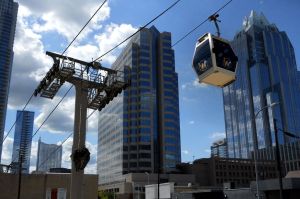 Frog Design’s renderings of what a cable car system in downtown Austin could look like.

In addressing our transportation infrastructure challenge we have to ask ourselves: Are we willing to try something a little weird?